I'm taking part in a wonderful Christmas Blog Hop: we're celebrating the Icelandic tradition of Jolabokaflod! Yes, it's all about books for Yule.

Throughout December, our group of historical fiction writers will give away free copies of our books, or offer them at reduced rates, for you to enjoy over the festive season!

Make sure later to check the link at the end of this post to find all the other exciting, fascinating posts from my writer friends!

The joy of gifts!

But first, let me tell you a bit about what the 5th December meant to me when I was a child...

December 6th is the feast day of St Nicholas (in the West; Eastern churches, where he is more popular, celebrate him on December 19th). The early Christian bishop is said to have died on 6th December AD 343.

It was said that, on his parents’ death, he gave away their wealth to the poor. He was also recorded as helping an impoverished man with the dowry for his three daughters, in that Nicholas threw bags of coins into the man's house at night, as not to be discovered. Later, he was said to have saved three innocent men from execution by revealing a bribed juror, and revived three children killed by a greedy butcher with the mere sign of the cross.

He became Bishop of Myra, and apparently attended the important Council of Nicaea, but records disagree on this. And although reports of his good deeds exist, they were written down hundreds of years later. But his reputation as a giver and saviour of children remained strong through the ages, with many fables added later that went down into common folklore, even though no early records exist.

So when I was small, growing up in south-west Germany, before I went to bed on the evening of December 5th, I put my boots outside the front door of our flat. Then, on the morning of December 6th, I would find my boots stuffed with clementines, walnuts and chocolates. And perhaps a small extra gift. It was very exciting!

This tradition dates back centuries, to Luther and the reformation, when the veneration of saints was separated from Christmas as the focus then should be on the Holy Family on the days of Christmas. So, despite us having been a Catholic family, we – like many other families we knew – took part in a Protestant tradition! I wonder if my devout grandmother ever knew that...

So who brought our gifts at Christmas, you ask? No Santa? Well, no. It was the Christ Child of course, the ’Christkind’. It placed gifts under the Christmas Tree whilst we were in church on December 24th. And it certainly didn't wear a red coat or come through a chimney. We didn't have one, for starters! Plus, German children were ahead of millions of other kids in that we opened our parcels on Christmas Eve (usually after dinner in our home). It's a win-win situation, if you ask me.

But are small children in Germany still thinking their presents come from the Christ Child? Or has Santa taken over since I moved abroad in the 90s? In which case, Saint Nicolas, the original ’Santa Claus’, might have the last laugh, and Luther would be turning in his grave...

These days, my family has shrunk to hubby, my mother, and me. None of us are religious, and we only give each other token gifts, one year on Christmas Day morning, the next on Christmas Eve. It's only fair in a German-British household!

Now for my important questions:

So if you celebrate Christmas, who brings the gifts in your house? Is it Santa? The Christ Child? Or perhaps simply parents and grandparents? Or don't you bother with all that ’commercial stuff’ and enjoy a simple Christmas or Yule with your loved ones?

I'm going to give away three ebook copies of Love Lost in Time,
my award-winning dual-timeline mystery.

I'm going to draw the winners from all those who give me their answers to the questions above in response to my Twitter or Facebook post sharing the blog hop page, or right here on my blog!

Excerpt from Love Lost in Time:

Hilda’s stomach curled into knots, and she briefly closed her eyes. 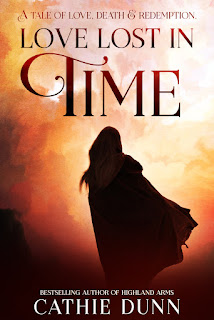 “You will not faint, Hilda, will you?” Amalberga touched her shoulder. “All will be well.”

“Hmm…” Hilda whispered, opening her eyes. “I will be fine.” She swallowed hard, then dipped her feet into the fur-lined boots. Usually, a servant would tie the strings that bound them around her ankle, but before she could suggest such a course of action, Amalberga kneeled in front of her and took hold of them, winding them tightly around ankle and lower calf.

Satisfied with the result, she stood. “Good.”

Amalberga straightened her own tunic and briefly touched her own head to find her veil securely in place, then went to open the door to the corridor. “I’m so proud of you. Now it is time.”

Hilda stood, carefully dropping the tunic to fall loosely into place. The stones glinted in the beam of the sunlight streaming through the window. She allowed Amalberga to wrap her fur-lined mantle over her shoulders and secured it at the front with a brooch.

Taking a deep breath, Hilda tried to calm herself, and stepped into the outside world as Amalberga, now wrapped in her own woollen cloak, opened it, and an icy blast hit them. The chill made her skin tingle. Or was that the anticipation? She knew not the answer, but still she stepped forward, treading carefully on the hard ground. The morning’s frost had lifted, and in the strong sun, the ground had become dry.

A gust of wind tagged at her veil, and she reached out to hold it in place. At the entrance to the chapel built of stones left by remnants of Roman villae her father looked resplendent in a tunic of dark silk she could glimpse through the gap at the front of his mantle. She found his smile encouraging. He would always want to see her content.

Amalberga stepped aside. “I shall be inside.”

Hilda nodded, then joined her father.

His eyes shone with pride, and he grinned at her. “Dearest daughter, you are beautiful! The very image of your mother, God rest her soul.” He engulfed her in a warm embrace.

His familiar scent soothed her raw nerves, and her breathing slowed. He held her at arm’s length and with a thumb gently wiped away a tear lurking in her eye.

“You make me very proud today, Nanthild.” He stepped to her right and cradled her arm in the crook of his. “Bellon awaits you inside, together with most of Carcassonne’s residents. Are you prepared?” A shadow crossed his brow.

Hilda nodded. She must be brave for him. “Yes, Father, I am.”

I hope you enjoyed my little post about gifts. More treats are to come all through December!

Follow all our posts to discover some brilliant reads that keep you busy over the holidays:

Have a wonderful festive season, and Happy Reading!