Over to Sue to tell us more about Never on Saturday! 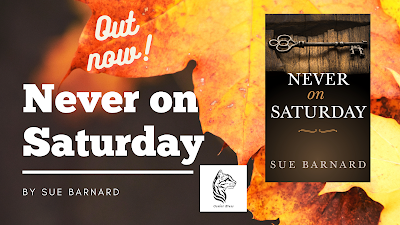 Today (15th December 2020), a new title joins the Ocelot Press catalogue.  Never on Saturday is a timeslip romance novella with a hint of mystery and a touch of the paranormal.  It is set partly in medieval France and partly in present-day North Wales, and is based on an old French legend.

Unfortunately I can’t be more specific at this stage about the legend itself, as that would give away too much about the story.

Two stories, two heartbreaks: one past, one present… 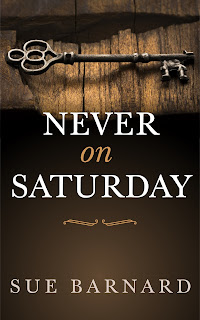 Leaving her native France and arriving in North Wales as a postgraduate student of History and Folklore, Mel is cautiously optimistic that she can escape from her troubled past and begin a new and happier life.

She settles into her student accommodation and begins work on her thesis, concentrating particularly on one fascinating manuscript: a compelling and tragic tale of a cursed medieval princess.

Then she meets Ray – charming, down-to-earth and devastatingly handsome. Within days, Mel’s entire world has transformed from lonely and frustrated to loving and fulfilled.  Despite her failure with previous relationships, she allows herself to hope that this time, at last, she can make it work.

But Mel’s dreams of happiness are under constant threat.  She is hiding a dark and terrible secret, which Ray – or indeed anybody else – must never ever discover…

And here, to whet your appetite, is a short snippet:

“Wow, it’s impressive, isn’t it?” Mel gazed at the long, ornate Victorian structure [Bangor Pier], stretching out across the Menai Straits. From one angle, it appeared to reach almost as far as the Isle of Anglesey on the other side of the water.

Ray nodded. “I quite often come for a walk along here. It’s particularly good when the tide’s out; you see all sorts of seabirds on the mudflats.”

“Are you a birdwatcher, then?”

“Not a serious one, but if I see one I like to know what it is. I learned a bit about them when I was at uni.”

“Nothing,” Mel lied. She prayed that he hadn’t noticed her alarm. “It’s just that…” She thought quickly. “Well…I didn’t expect to find a marine biologist working in a coffee shop!”

“I must be honest,” Ray sighed, “working in a coffee shop wasn’t exactly my first choice! But jobs in marine biology are pretty few and far between. And even unemployed marine biologists have to keep body and soul together somehow. But hey, that’s more than enough about me. What about you?”

“What about me?” Mel asked nervously.

“What are you doing in Bangor? You’re at the university, you said?”

Mel stared out across the Straits, as if admiring the view of the island, as she tried to compose an answer. She didn’t want to tell an outright lie, but how much – or how little – could she get away with telling him?

“I’m studying history and folklore,” she began cautiously, without taking her eyes off the view.

“Oh yes? That sounds fascinating. Are you familiar with the Mabinogion?”

“It’s a collection of traditional Welsh tales. I studied it at school. I’ve got an English edition I can lend you if you’re interested.”

“Thank you.” Mel turned to him and smiled with genuine enthusiasm. “That would be lovely.”

“So, you come from France? Which part?”

“From the Vendée. It’s on the west coast, just south of Brittany. There’s a castle called Lusignan near the town of Vouvant. Or at least, there used to be – I think it’s just a ruin now. I’ve always understood that it was built by one of my ancestors. I think that’s where my surname comes from.” She smiled wistfully. “I don’t know how true that is, but it’s a nice story.”

Ray grinned. “I’ve heard people say there are some parts of Wales where you feel you could be anywhere in Brittany. Is that what’s brought you here?”

Mel shook her head. “Not entirely,” she answered quietly. “My parents died, and I felt as though I needed a new start somewhere else.”

Ray whistled under his breath. “I’m sorry to hear that. I…” His voice trailed off.

Mel got the impression that he was even less comfortable talking about this than she was. There was an awkward pause.

“But I’ve sort of got used to it now,” she said eventually. “I try not to think about it too much. And I love it here. I’m very much an outdoor girl. I walk, I swim, and, yes, I like birdwatching too.”

Ray’s face brightened visibly. He waved an arm across the Menai Straits towards the Isle of Anglesey. Its bright colours – the greens, reds and yellows of the landscape contrasting with the sharp blue of the sky above and the mellow green of the water below – sparkled in the late afternoon sun.

“Have you been across to the island?”

Mel shook her head. “As I said, I’ve only recently arrived here.”

“Well, how do you fancy going for a birdwatching walk over there? There’s a super beach down on the south coast where you can see all sorts of things.”

Mel beamed. “Thank you, that would be lovely. When did you have in mind?”

“Sorry,” she muttered, staring at the ground. “I can’t manage tomorrow.” Please don’t ask me why not…

“Well, how about Sunday, then?” Fortunately, Ray appeared to accept her answer without seeming to be too inquisitive.

She forced her face back into a smile before looking up at him. “Sunday would be lovely. Thank you.”

But why can’t Mel meet Ray on Saturday?  You can find out by reading the rest of the story!

And for a limited time, the Kindle edition is available at the special early bird price of just 99p.  Click here to be taken to your local Amazon store. 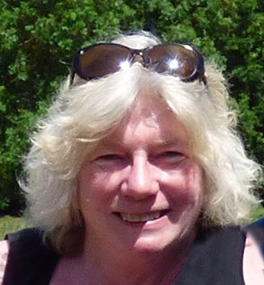 Sue Barnard is a British novelist, editor and award-winning poet who believes that an immaculate house is a sign of a wasted life.  Thus, her house is chaotic but her life is anything but dull.
Her mind is so warped that she has appeared on BBC TV’s Only Connect quiz show, and she has also compiled questions for BBC Radio 4's fiendishly difficult Round Britain Quiz. This once caused one of her sons to describe her as "professionally weird." The label has stuck.
She speaks French like a Belgian, German like a schoolgirl, and Italian and Portuguese like an Englishwoman abroad.  She is also very interested in family history.  Her own family background is far stranger than any work of fiction. She would write a book about it if she thought anybody would believe her.
Sue lives in Cheshire, UK, with her extremely patient husband and a large collection of unfinished scribblings.
Follow Sue here:
Facebook (https://www.facebook.com/suebarnardauthor)
Twitter (@AuthorSusanB)
Instagram (https://www.instagram.com/suebarnardauthor)
Blog (http://broad-thoughts-from-a-home.blogspot.co.uk).
Also by Sue Barnard:
The Ghostly Father
Nice Girls Don’t
The Unkindest Cut of All
Heathcliff: The Missing Years
Finding Nina
France history legends mythology myths Never on Saturday novella Ocelot Press Sue Barnard