I'm over the moon!

After nearly ten years in the field, Dark Deceit has become a paid #1 bestseller in the Literary Medieval Criticism Amazon UK charts. I'm so thrilled about it. 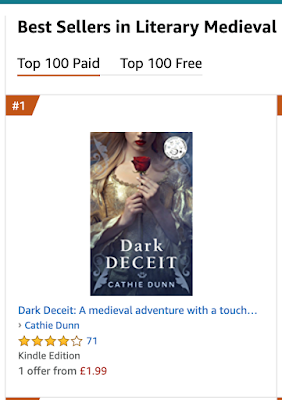 The idea of Dark Deceit was conceived at a small train station in south Wales, on my way to work at a local university. As I did medieval reenactment in those days, I thought to add my experiences to a novel, and Dark Deceit – a medieval romantic adventure – was born!

It's set in one of my favourite historical period, called The Anarchy by chroniclers. The name describes the period following the death of King Henry I of England in 1135 and the ascension of Henry II to the throne in 1154. The king's designated heir to the throne, his daughter, Matilda, young widow of the Holy Roman Emperor, did not leave her home in Normandy in a hurry to claim her inheritance.

This left her cousin Stephen of Blois to claim the title, as the nearest legitimate male in the royal line, and the support of many nobles who really did not fancy a woman on the throne, least of all one as haughty as Matilda is said to have been (though in how far we can believe biased chroniclers is another matter).

But Stephen's popularity waned soon, and Matilda, with the help of her elder, illegitimate half-brother Robert, earl of Gloucester, challenged him. Civil war ensued on both sides of the Channel.

It is an utterly fascinating period, with lawlessness being the norm in many parts of the country as nobles fought for favours, often playing both sides off against each other. With that background in mind, Dark Deceit shows the dangers of this lack of law and order.

One day, there will be a sequel to Dark Deceit, but until then, I hope you'll enjoy delving into The Anarchy with Geoffrey and Alleyne...

“Readers of historical fiction will love every page of this exciting story.”

A cowardly murder. A knight with a cause. A lady in danger.

Returning from battle at Lincoln, Geoffrey de Mortagne, undersheriff of Gloucester and spy for the Empress Matilda, comes to the aid of a knight who had been ambushed, but he arrives too late. As he has given his word to the dying man to look after his only daughter, Alleyne, Geoffrey stays at her manor whilst he investigates the attack. To his dismay, there is more to it than a mere attack outlaw attack. Soon, Geoffrey is torn between the oath and his duty to the Empress.

Left to fend for herself following her father’s brutal murder, Alleyne de Bellac reluctantly accepts Geoffrey’s support. But she doesn’t trust the taciturn stranger who, she feels, keeps secrets from her, so she writes to Will d’Arques, an old friend of her father, for help. Yet with loyalties changing with the wind, she is no longer able to tell truth from lie.

With her life in danger and her inheritance at stake, which man can Alleyne trust?

Discover England and Normandy divided by the ‘Anarchy’ – a brutal civil war for the English crown between the Empress Matilda and King Stephen the Usurper – where vows are broken and allegiances are rescinded by the stroke of a sword!

Dark Deceit is available on Amazon in Kindle and paperback formats. It's also available to read for free on Kindle Unlimited.