My Place - Shattered by Jennie Marsland

November 06, 2011
This Sunday, I'm extending a warm welcome to the talented Jennie Marsland and her novel, Shattered. Her setting is fascinating!


Jennie Marsland is a teacher, a painter, a musician and, for over thirty years, a writer. She fell in love with words at a very early age and the affair has been life-long. She enjoys writing songs and poetry as well as fiction.
Jennie is a history buff as well as an unashamed romantic. Glimpses of the past spark her imagination, and she believes in happily ever after. She lives in Nova Scotia with her husband, their cat Emily and their outrageously spoiled Duck-Tolling Retrievers, Chance and Echo.
My Place:
My latest historical romance, Shattered, takes place in Halifax, Nova Scotia, one of Canada’s oldest cities. The reason for Halifax’s existence is its harbour, which is one of the biggest and deepest in the world. As an added bonus, the outer harbour is connected by a channel called The Narrows to a large inner harbour, Bedford Basin, which is invisible from the open ocean. During both World Wars convoys assembled there, protected from weather and detection by the enemy, while they prepared to cross the Atlantic with troops and supplies. This postcard shows the outer harbour and downtown as it was in 1920. 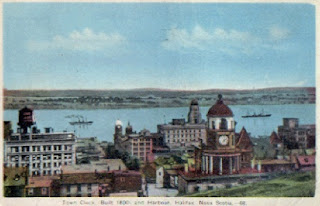 Halifax is built on several hills, the most prominent of which is Citadel Hill, where the original fortifications were built when the city was founded in the 1700s. On the slope of ‘The Hill’ stands the town clock, one of our most beloved landmarks, which I had included on the cover of Shattered. Since 1803, it has kept time through the colourful and sometimes illicit goings-on of a port city and military garrison. This part of town has always catered to the two greatest needs of men just in from the sea – one of which is drink. 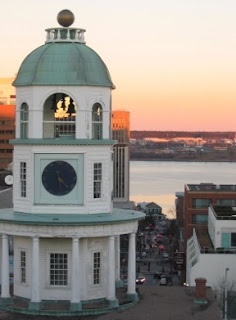 The clock has counted the hours through several wars, as well as through the darkest day of our history – December 6, 1917, the day when a ship loaded with wartime explosives collided with another ship in The Narrows and detonated, resulting in what is still the largest non-natural, non-atomic explosion in recorded history. Citadel Hill shielded the city’s South End from the worst of the impact, but the North End community of Richmond, where my fictional characters live, was destroyed. Two thousand lives were lost and the face of the city was changed forever.


Richmond was replaced with a neighbourhood we call the Hydrostone District, named after the cement blocks used in its construction. It’s attractive and rather trendy, but I’d like to be able to go back in time just for an hour and see the area as it used to be.


Almost nothing is left of the landscape my characters would have known, but subtle reminders of the Explosion remain. People still unearth remnants of homes and possessions in their yards, and the neighbourhood has a special, indefinable energy.


It’s no surprise that supernatural stories of the Explosion abound. Several years ago a friend of mine who lives in the North End had an unsettling experience. Arriving home from work one evening, she glanced in her kitchen window and saw a man dressed in old-fashioned clothes, sitting at her table. While she was looking at him, he vanished. Her experience became my inspiration for Liam Cochrane, the hero of Shattered. I taught for ten years in a school that was one of the few North End buildings to survive and, climbing the main stairs in the dark on winter mornings, I often felt that if I listened carefully enough, I’d hear children’s laughter from ninety years ago. 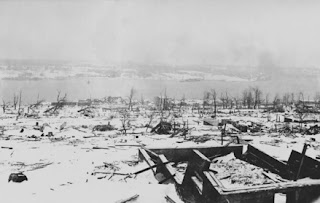 Blurb:
Liam Cochrane no longer belongs. He lost his youth and his brother on the battlefields of Europe. Now he’s home in Halifax, Nova Scotia, trying to dull his pain with liquor and the occasional willing woman. He’s become a stranger in the North End neighbourhood where he grew up.
Alice O’Neill has never belonged. Able to read music, but not words, she dreams of teaching piano – and of Liam, who has held her heart for years and never known. But Liam has shadowy ties in England that he’s revealed to no one, and in that fall of 1917, Halifax is on a collision course with fate. On December 6, a horrific accident of war will devastate the city’s North End. What will be left for Liam and Alice when their world is shattered?
Excerpt:
I’ll leave you with an excerpt from the beginning of the story, before Liam connects with Alice O’Neill, his heroine. At this point he’s dating Alice’s older sister, Georgie, not knowing that Alice has carried a torch for him for years. Enjoy.

“K-K-K-Katy, b-beautiful Katy,
You’re the only g-g-g-girl that I adore…”
The three singing sailors lurched along Brunswick Street, trailing liquor fumes in their wake. Liam caught his companion by the waist and pulled her out of the men’s path, into the darkened doorway of a closed pub. One of the three looked over his shoulder with a good-natured leer and snapped off a salute as limp as his wilted uniform. Giggling, Georgie pressed into Liam’s arms, edging him further back into the shadows.
“Liam, my head is spinning. If I have any more to drink I’ll be as tipsy as those three. It’s time to go home.”
She snuggled against him. Her curves fit his hollows to perfection. When Liam bent his head to kiss her, she rose on her toes and tangled her fingers in his hair. A brief, fierce moment later, Georgie rested her head on his shoulder. With her pressed warmly against him, her lips grazing his neck, going home was last on the list of things Liam wanted to do. He tucked a finger under her chin and turned her face up to his.
“You sure you’re ready to call it a night?”
Georgie’s smoky green eyes glowed with invitation while her fingers ran lightly along his spine. “No one will be home. I didn’t say anything about calling it a night.”
She reached for his mouth. She tasted of youth and life, heady and potent as the whiskey in his blood. Liam kissed her again, hard and deep.
“I like the way you think, lady. Let’s go.”
They had a walk ahead of them, all the way from Brunswick Street north to Richmond, but the bootlegged rye they’d shared during their picnic in Point Pleasant Park had loosened up Liam’s bad hip. As for Georgie’s inhibitions, after three evenings together he knew they didn’t need much loosening. Girls like her had been rare in Halifax before the war, but not any longer. Peekaboo blouses and skirts that showed the ankles were only surface ripples on the current of change.
They started north past Citadel Hill, walking hand in hand. At the foot of the slope the squat base of the town clock lay in shadow, but the late sun gilded the face on its round, domed column. Half past eight.  A stiff sea breeze snapped the flags that flew from the old fort on the hilltop. Beneath, the grey stone reflected the pink of the twilight sky. Later, fog might roll in off the harbour, but for now the stored heat of buildings and cobbles kept it at bay.
Halifax wore a grim face in the grip of winter, a drab and ghostly one in rain, but on a fine, end-of-summer day like this the city and its people smiled. Even the brick and stone of the industrial waterfront looked brighter and more welcoming, the bustle of wartime business a little less serious. The long evenings drew people out of blacked-out homes and barracks to stroll, socialize and look for trouble, always easily found around the Hill. This part of town catered to the two greatest wants of men just in from the sea, one of which was drink.
They passed another pub, once Liam’s favourite, now locked and shuttered under prohibition. Damn shame, but with the harbour full of ships from all over the world, a man didn’t have to settle for the rotgut served in the ‘blind pigs.’ He’d cultivated his sources since being invalided home. Forgetfulness had its price, but it was priceless.
Links:
Buy Link for Amazon: http://www.amazon.com/Shattered-ebook/dp/B005PGR1L0/ref=ntt_at_ep_dpt_3
Buy link for Smashwords (for those without Kindle) http://www.smashwords.com/books/view/91440
My blog: http://www.jenniemarsland.blogspot.com 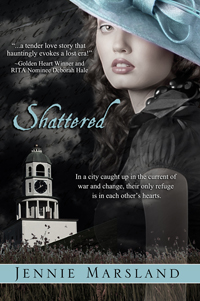