Showing posts from February, 2011
Show All 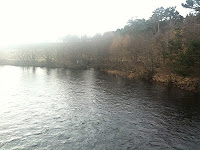 We only visited the 'outlaws' in Drumnadrochit two weeks ago, with a stay in Drum and a night in Pitlochry on the way back, so you might be tempted to think another trip to the Highlands was boring, repetitive? Not so! This time, we joined a busload of Geordies (folk from Newcastle, for those uninitiated to British regionalisms) on a weekend of skiing (not us), walking, eating, drinking... and singing! The coach collected us early Friday evening. By that time they'd already been on the bus, and on the booze courtesy of hip flasks, for over 2 hours. We'd only had a beer at Jane's who had prepared a yummy courgette lasagne. This of course meant we had some catching up to do. I'd borrowed a hip flask which I filled with vodka & lime, a little more tasty than plain vodka, or whisky which hubby decided on. We were just in time to join a quiz, which we did pretty badly in. But soon we arrived in Newtonmore, checked into our rooms, and gathered in the bar. Tha
Post a Comment
Read more
More posts