Showing posts from December, 2018
Show All

It's finally time for some fantastic news: I'm so thrilled to share that  A Highland Captive  is now online, on pre-order at Amazon, for only 99p / 99c. So head over there now and reserve your copy:  http://mybook.to/HighlandCaptive It will be released into the wild on  3rd March 2019 ! Blurb: 1298 Scotland Cailean MacDubhgaill, a knight from a small western island fighting for the Scottish cause, joins the battle at Falkirk but is wounded when he takes a blow to the thigh by an axe. Sir Eoín de Moray, uncle to his late friend, the former guardian, Andrew, helps him escape the carnage and takes him into a nearby forest, but is killed whilst fighting off pursuers. Once Cailean has recovered from his injuries with the help of the healer Eithne, he rushes to de Moray’s manor on the northern shores of Loch Ness to convey the news to de Moray’s daughter, Isobel, but he is too late. He finds the manor burnt down, its people displaced, and Isobel abducted. Determined
Post a Comment
Read more 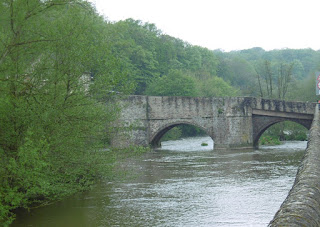 Today, I'm delighted to extend a warm welcome to historical fiction author Derek Birks , whose novels are set during the Wars of the Roses, when the Houses of York and Lancaster fought for the English throne. A fascinating era! With that historical background in mind, Derek introduces us to the market town of Ludlow, a strategic place during those uncertain days. Over to Derek... ~~~ Where my stories come to life: Ludlow Ludford Bridge I discovered Ludlow during a major flood in July 2007 - the year Tewkesbury was virtually cut off by  flood water and many other areas were also severely affected. One of the main roads into Ludlow was closed because the bridge had been washed away! It was not a very auspicious start to my association with the town. Under normal circumstances, Ludlow isn’t exactly a town that makes the headlines, so why did I go there at all? Well, I was researching my first historical novel,  Feud , set in 1459 during the Wars of the Roses.
Post a Comment
Read more
More posts